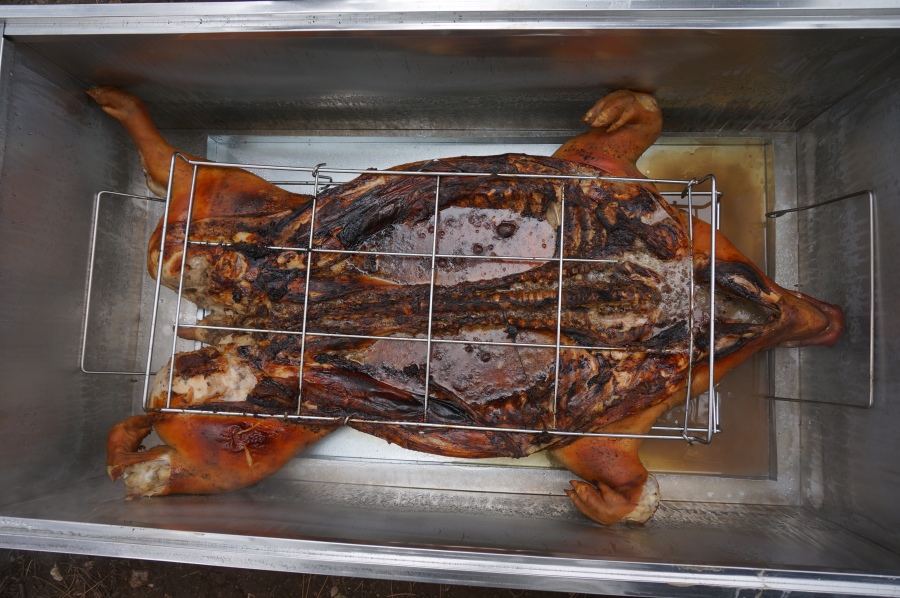 This was my first time out of the country (besides going to Canada which I don’t really think counts) it was also the first time I was away from my family for over three weeks. The first time I had been exposed to third world poverty. The first time communication and the language barrier became a real problem. The first time I stepped into the South China Sea, and perhaps most importantly the first time I really experienced what Filipino Food is all about. Food from the Philippines is hard to define. The Islands have had Spanish, Japanese, Chinese, American as well as their own indigenous food all influencing their cuisine throughout the centuries. Just watch Anthony Bourdain’s episode on the Philippine Islands to get a better idea.

One thing I know the Filipinos do well is roasting pig or Lechon as they call it. We were a few hours outside Manila near the Taal Volcano at Tito Jim’s house where the whole family came together for a Christmas Dinner celebration. I wasn’t sure what was going on, as I was for most of the trip, (language barrier) so I was a little shocked to walk into a whole roasted pig laying on the buffet table an apple stuck in its mouth waiting to be carved up and gobbled away. It was quite an experience to say the least, in a good way. It was the start of many food adventures to come.

By this time my palate and appetite had grown and expanded to a full-fledged foodie ready to try anything and everything. So my second encounter with Filipino Lechon began. My immediate family was away spending their Christmas at their cabin in Duck Creek Utah. So my fiancé Ryan and I spent this Christmas with friends and a little piggy from R.C. Farms. R.C. Farms is a local pig farm here in Las Vegas it was featured on Andrew Zimmern’s “Bizarre Foods America” and in the Business Insider for its “innovative spin on food recycling”. You see the pigs live off of the millions of pound of leftovers from the buffets on the Vegas Strip. The food is sorted and boiled making it safe and sanitary for the pigs to eat. A happy pig is a tasty pig. Anyway, back to Christmas Day. Trying to roast a whole pig on a makeshift roasting spit over hot coals in the backyard was no easy task. Once we finally got the thing on the spit and stuffed with lemongrass, onion, bell peppers and lots of ginger we sewed it up and started the long proses of cooking the Lechon. This meant that two people had to sit on both ends and turn the spit constantly. After hours of roasting the whole thing came off the spit steaming and juicy. The meat was sweet and tender with hints of the lemongrass and ginger lingering on my tongue. The only let down was that crispy skin that one associates with Lechon. But not to worry, I would get my fill of this tasty treat a few years down the road. 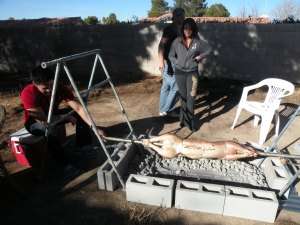 My parents had become interested in whole roasted pig themselves and wanted to try to make one of their own. So down to R.C. Farms they went and picked out an 80 pounder and drove it up to the cabin in Duck Creek in a giant ice chest to celebrate Memorial Day. Instead of spit roasting however, my mom opted for the La Caja Asadora Roasting Box; you can buy these from Amazon for about $350. Strictly speaking this is traditionally known as the Cuban way to make what is called Lechon Asado. Instead of being stuffed and roasted over hot coals on a spit the pig is laid flat and put into a metal lined wooden box that is topped with hot coals and allowed to roast inside for a number of hours. This is how we did it.

Allow the pig to soak in a brine of your choosing overnight.

Remove the pig and give it a rinse with the hose. Next use a syringe to inject a flavorful liquid into the meat.

Rub seasoning all over the outside of the pig, a little massage never hurt anyone.

Clamp the pig between the two grills that come with the roasting box. This helps it stay flat and cook evenly. This step needed some man power.

Place the pig into its snug box skin side down and cover the lid with coals. Be sure not to fall on your way to the box like we did. Don’t worry, not one bit of the pig touched the ground. 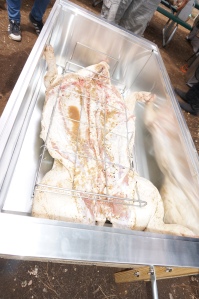 Light the coals and spread them over the lid. Continue, to add new coals every hour till the pig is ready to turnover. 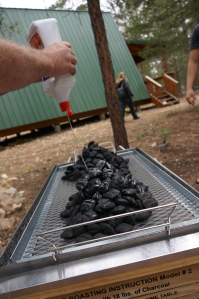 After about four hours of cooking (this depends on the size of the pig) pop the lid off and flip the pig so the skin is now face up. Baste the whole thing with milk and slid the lid back on for another half hour or so till the skin is perfectly crispy. 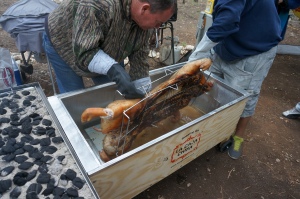 Check the temperature to make sure that it reads no less than 165 degrees. Next remover the pig from the roasting box and place on a carving table, carve it up and enjoy. 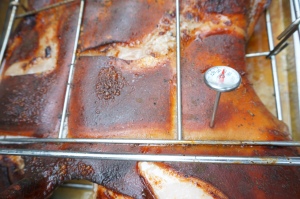 The carving can be a bit tricky if you aren’t sure what you are doing. Lucky for us one of my dad’s employees spent some time on his grandfather’s farm and taught him how to properly   butcher a pig so we were in good hands. The pig came out delicious. Crispy on the outside, tender and juicy on the inside just what Lechon is supposed to be. Some people thought the rub was a little strong and the skin was missing that pure pork flavor. I however, loved the flavor of all the spices. This one pig fed about 40 hungry people with tons of left overs.