As some of you already know I’m a big Anthony Bourdain fan, like huge! Like, if I weren’t already engaged and he weren’t already married I’m sure he would be my husband. We could travel all over the world together while he drops vulgar banter my way and becomes increasingly grumpy in his old age. Just a daydream I have in my spare time. Anyway, I was watching his “Parts Unknown” show on CNN a few weeks ago. He was in Mexico talking about the ever growing and violent drug cartel and the corruption that so plainly exist within Mexico. Among all these distasteful things however, are all the good things Mexico has to offer in particular their food. The episode was of course full of delicious things that I could not begin to describe let alone recreate. However, one small thing stood out that seemed plausible for me to try to make myself, salsa. Fresh salsa made from simple ingredients that pop in your mouth.

Now let’s talk peppers for just a minute. In this recipe I use Fresno peppers they come in red or green and hit a 5,000 on the Scoville Heat Units. The Scoville Heat Units are a way for scientist to scale the spice in peppers and other spicy foods. This scale starts at 0 for something like a Bell Pepper and goes all the way up to 1,436,700 for the Ghost Pepper which is consider one of the hottest peppers in the world. So for those of you that can’t handle the heat, the fresno pepper is a good place to start. You can also control the spice level by removing the seeds from the peppers. I normally remove the seeds from one and keep the seeds in the other this gives the salsa a nice kick without blowing your head off.

2 Limes, cut in half

Start your BBQ and get the flames going. Place the tomatoes, limes and peppers on the grill and allow them to blister and char for about ten minutes.

Once the skin on the tomatoes splits and the pepper have some black color on them take them off and place them in a plastic bag and seal it closed. The limes you can set aside for later. Allow the tomatoes and peppers to steam in the bag for about five minutes. Then take them out and remove the skin, the seaming will make this super easy. 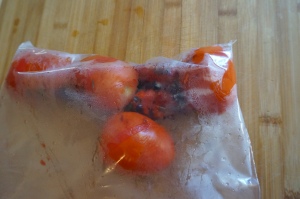 Next cut the tomatoes in half remove the seeds and give them all a small dice. 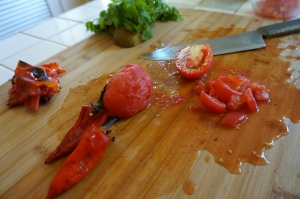 Do the same with the peppers removing or keeping the seeds as you wish. Remember to wash your hands after handling the peppers no touching your face!

Now simply toss the tomatoes, peppers, onion and cilantro together in a bowl then squeeze the lime juice over it. Depending how juicy your limes are you may only need one, season with a little salt to taste. 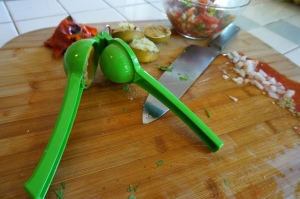 This spice condiment is excellent as a snack with some salty tortilla chips but I have also used it in tacos with a little queso fresco, on grilled chicken or stake or with your morning eggs. Just remember the key to this is the freshness your ingredients. Keep it simple and fresh like they do in Mexico. Que disfrutes!

P. S. that bright green thing on my cutting board is a lime press and for those of you that don’t have one you must do yourself a favor and get one! You will be shocked to see how much more juice you will get out of those tough little things!

3 thoughts on “Nice and Spicy or Just a Kick”