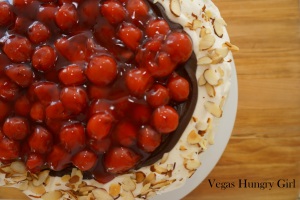 My sister gave birth to her twin boys on the 28th of July 2014. They were over a month early and had to be delivered by emergency C-section. The two boys named Ian and Nicholas were small but relatively healthy weighing in at 4lb for Nicholas and 5.5lb for Ian.They spent the first 2 and a half weeks of their lives in the NICU strapped to all kinds of monitors.

Nicholas was our tiny but mighty baby he only needed his oxygen tube for a day and was pretty quickly removed from his NICU warming bed. Ian on the other hand needed a little extra help with oxygen and he also had a picc line inserted.

Needless to say it was quite a busy few weeks. But don’t worry it all ends well! Ian and Nicholas came home on the 13th of Aug 2014! We had a small family party that following Saturday to celebrate their homecoming. I made the cake.

I wanted to make something rich and kind of spectacular to dedicate to my two baby nephews and in all honesty when I think of fabulous cakes I always turn to Ina Garten. I’ve made this cake many times before it really is the best chocolate cake I have ever had it pleases crowds and is super versatile. I’ve made it into cupcakes with ganache, a traditional two layered cake with chocolate frosting and even used it for brownie bites. It’s called Beatty’s Chocolate Cake courtesy of Ian Garten check out how to make it here Beatty’s Chocolate Cake. So how else can I use this cake? How about adding cherries and whipped cream? Sound good?

For the Whip Cream Frosting

For the Chocolate Ganache

For the Chocolate Cake

First make the chocolate cake according to Ina Garten and let them cool. Here’s a tip, follow all of Ina’s directions including putting parchment paper at the bottom of the cake pans. I decided to skip this step thinking that butter and flower would be enough to keep them from sticking. Well it wasn’t I took quite a bit off the bottom of the cakes when I took them out so take the time to put in the parchment paper.

Next mix the cherry pie filling and Grand Marnier and set aside. Then whip the cream adding the sugar and almond extract and toast your almonds. Now all that’s left is to assemble your cake.

Cut squares of parchment paper to cover your cake plate then place the first layer on top. Dollop a generous amount of whipped cream on and spared it almost to the edges and sprinkle over a hand full of almonds. Then spoon the cherries over the cream and don’t be shy about it. Add the next layer of cake and then spread a thin layer of whip cream all over the cake and pop it in the fridge for about 20 minutes.

While the cake is in the fridge make the ganache by simply adding the chocolate, cream and Grand Marnier to a microwave safe bowl. Pop this into the microwave for about 2 minutes stopping every 30 seconds to stir then set aside to cool. 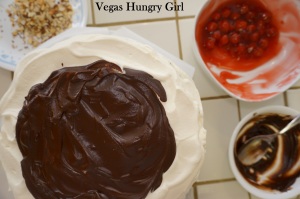 Next take your cake out and add a nice thick layer of whipped cream all over. Then spoon the cool ganache over the top followed by the cherry filling then sprinkle the almonds around the side.  Once your cake is all together pop it back in the fridge till you are ready to serve.

Here’s to you Boys!