I first learned how to make these golden beauties while I was living in London studying at the London Metropolitan University. I shared a flat with Cassi, my fellow University of Nevada Las Vegas student who was also studying abroad that semester. Our tiny flat consisted of two twin beds a miniature bathroom and a “kitchenette” that ended up being a microwave and an electric kettle, dame those English and their tea. Cassi and I were restricted to the communal kitchen on the 9th floor. Therein resided exactly one eight inch fry pan and one ten inch sauce pan 8 burners 2 microwaves and a teeny fridge that you had to keep under lock and key. Needless to say our creative culinary endeavors most of the time, left us wishing for the full and shiny kitchens we had left back in Vegas. However, when Cecilie a student from Copenhagen who was also studying for a semester at London Met, told us of a pancake recipe that consisted of only two ingredients we were eager to try it out.

Yields 4 to 6 Small Pancakes, enough for two small children or one hungry adult. Definitely recommended to double the recipe.

In a medium size bowl break the banana into pieces and smash with a fork until the banana becomes paste like.

Next, add the eggs one at a time mixing with the fork. The batter will be thin and a bit chunky.

In a small fry pan place a little butter (good English butter if you can find it) and allow the pan to come to medium/high heat.

Put a few spoon fulls of the mixture into the center of the pan and allow it to cook for a few minutes. The batter is soft when it cooks so flip the pancakes with care. 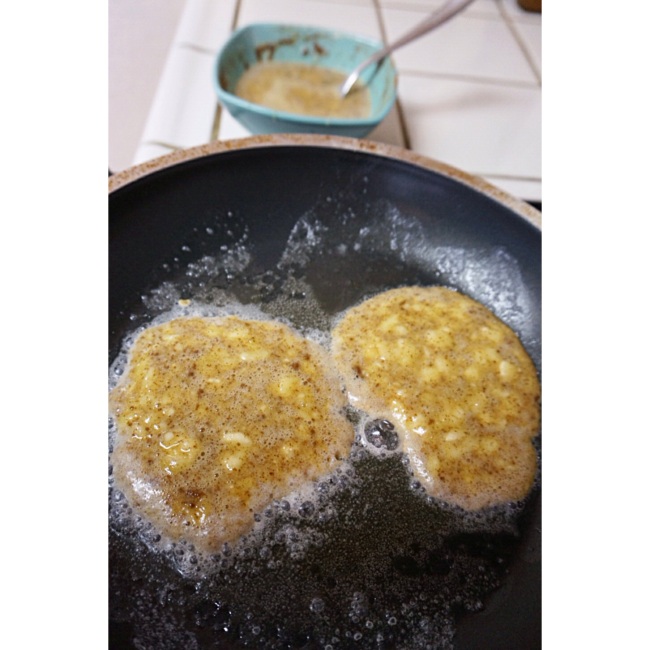 Cassi and I made these in our shared kitchen declaring it pancake breakfast day! We invited another student from the 3ed floor and whipped up a batch of these thin and tasty treats serving them with more butter and, after having no luck finding traditional American syrup, a tin of English golden syrup which turned out to be delicious! Now home in Las Vegas I have continued to make these Denmark pancakes whenever I have bananas that have sat around too long. I now add a few dashes of cinnamon to worm it up a bit. I’ve made them for my fiancé who had no idea these were just banana and eggs. I also gave the recipe to my sister who lives in Austin I thought her two year old son would love them and I was correct. “He gobbled them all up!” she told me. Thanks you Cecilie for sharing these tasty treats with us!

P. S. If you’re feeling particularly greedy add a smear of Nutella and a sprinkling of powder sugar on top!